The Hall of Fame, celebrating its 25th year, is comprised of 170 men and women whose contributions have resulted in the long-term advancement of homebuilding, construction, development, marketing, finance or related services within the building industry in California. The honorees are also involved in public service, civic, social and philanthropic organizations in their communities.

“All six of this year’s inductees are truly giants in the industry, people who have helped thousands of California families attain the American dream of homeownership, while giving selflessly to make their communities a better place to live,” said Dennis Moresco, a Atascadero-based homebuilder who is chairman of the California Homebuilding Foundation, which sponsors the Hall of Fame.

The Hall of Fame Awards Dinner will be held Tuesday, June 16, at the Westin St. Francis Hotel in San Francisco. For tickets or more information, contact Terri Brunson at CHF at (916) 340-3340 or tbrunson (at) mychf (dot) org.

The members of the California Homebuilding Hall of Fame, Class of 2009, are:

Layne is a licensed California Certified Public Accountant and Real Estate Broker. He has been a member of the California Building Industry Association since 1995 and served as Chairman of the Association in 2006. In 2007, Layne helped to establish the California Major Builders Council and was subsequently elected Chairman of the Council. He has served on the boards of HomeAid of Northern California since 1995, Partners Fore Golf (a chapter of The First Tee) since 2005, and the Livermore Performing Arts Center since 2007.

Chip Pierson, AIA, is Principal and General Manager of Dahlin Group Architecture Planning whose core business has been performing residential design, urban design and community planning services for the homebuilding industry. Established in 1976, Chip joined Dahlin Group one year later. With his character, drive, leadership and expertise in business management and architecture, Pierson has grown Dahlin Group from its infancy to what it is today: an award winning, multi-office, full service architecture and planning firm.

Pierson serves on the Board of Directors of the Home Builder’s Association of Northern California and the Building Industry Association of San Diego. He has been an active participant with the Gold Nugget Awards and has donated his time serving on their Advisory Committee since 1994. Chip served two terms on the Board of Trustees of the California Homebuilding Foundation. He is a member of the American Institute of Architects.

Ray Becker was a 25-year veteran of the real estate development industry. He managed the development of large-scale master-planned communities involving more than 40,000 homes, as well as thousands of acres of retail and industrial projects, in Riverside, San Bernardino, Orange, and San Diego counties. In January 2004, Becker joined DMB Associates, the Scottsdale, Arizona-based community builder, to develop a new town on 4,500 acres in San Benito County, at the south end of the Silicon Valley. Prior to joining DMB, Becker was a senior vice president with Lennar Communities’ Southern California Division.

Becker’s involvement with the BIA began in 1982. In 1987, he served as president of the Riverside Chapter, Building Industry Association of Southern California and was president of BIA/SC in 2003. He served on numerous committees and task forces at CBIA, including president in 2008.

Ray is survived by his wife, Martha.

Forrest (Woody) Brehm, Chairman and Chief Executive Officer of Brehm Communities, has been dedicated to the California homebuilding industry and building dream homes for the people of his state as fervently as he has overseen his successful company.

As a self-made entrepreneur who began his career in civil engineering, Mr. Brehm built his first home and apartment building in the early 1960s, followed by numerous commercial and industrial buildings and restaurants. In 1963, he founded what is now Brehm Communities and built his first residential communities throughout San Diego County.

The Brehm name stands for quality, value and integrity in homebuilding and community development throughout Southern California. As a homebuilder and planned community developer, Mr. Brehm has brought thoughtfully-designed and wellconstructed homes to thousands of families.

As an industry activist and community leader, Mr. Brehm has been involved in numerous industry and community organizations. He co-founded and served as chairman for the San Diego County BIA President’s Council and Real Estate Finance Committee. He has served on the BIA Board of Directors, Ways and Means Committee and community task forces including the Coalition for San Diego Business, Mayor’s Housing Advisory Task Force, and the San Diego Urban Corps. He has sponsored the Chula Vista Police Department and the Chula Vista Boys & Girls Club. He also has been deeply involved with the events of BIA Cares for Kids.

Richard Oliphant grew up in Iowa and started in the development, real estate and construction business after attending the University of Iowa. Dick came to Tucson, Arizona in 1960. As the General Manager of the 2nd largest building company in Tucson, Dick built the first tract-based golf course in Tucson with Palomar Mortgage.

Dick joined Palomar Mortgage and built three golf course communities before buying one of the projects located in Palm Desert. Two of Dick’s most recognizable projects include the Indian Wells Tennis Gardens, home of the world’s 5th largest tennis tournament and the Classic golf course project in Palm Desert that is home for the Bob Hope Classic.

Dick is the recipient of many awards including an Honorary Doctorate from the CSU system. He was on the Indian Wells City council for eight years and its’ Mayor for eight years. Dick can be found on the golf course, traveling and enjoying time with his wife, Jan, and their family.

Jeff Slavin has been deeply involved in the activities of HomeAid for the past 12 years, first as a builder captain, then as Chairman of the Board of Directors, and now as Chief Executive Officer. During that time, HomeAid’s 22 chapters have grown into the largest provider of housing for the temporarily homeless in America.

During his 30 year career in the housing industry, Slavin has been responsible for the development of thousands of homes across California. In 1986, he was appointed President and Chief Operating Officer of Ahmanson Developments. He subsequently guided the transformation of the Donald Bren Company into California Pacific Homes as its President and Chief Operating Officer and led its resurgence on the Irvine Ranch as an active homebuilder.

Slavin’s industry activities include long service on the BIAS/SC Sales and Marketing Council, the Board of Directors of BIA/OC, and CBIA’s PCBC Committee, including the presidency of the show in 2001.

For more information on the Hall of Fame or to learn more about the Foundation and its programs please contact Gail Grimm, Executive Director, at (916) 340-3340 or ggrimm (at) mychf (dot) org, or visit our website at www.mychf.org. 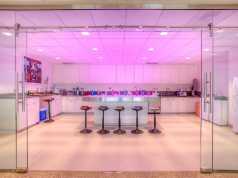