Duncan Lemmon, president of Lee’s West L.A. office who will be handling the listing, said the price tag will be $10.6 million. The building was once owned by famed Hollywood director Cecile B. DeMille and is the last of the original four local Brown Derby restaurants.

The historic building has been completely renovated and is currently occupied by Chase Bank and Louise’s Trattoria, Lemmon said, who with a group of other investors, purchased the building in 2004. Then, plans were made to build a mixed-use project which included a Whole Foods and residential apartments. Other members in this group include John Battle, a Lee principal, and Mike Adler and Rick Gable, both of Adler Realty Investments Inc.

Since the Los Feliz Brown Derby restaurant closed in 1960, the building has been leased to four tenants including a night club which used the name Derby. At the moment, another restaurant is in negotiations to lease the reaming 2,777 square feet of the building. 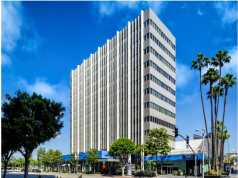